All the World's a Classroom

My reading journey through Thinking, Fast and Slow, Part 1

I’m thoroughly enjoying my journey through Thinking, Fast and Slow by Daniel Kahneman. This book is a must-read for anyone who cares whether the mechanism by which they think, process information, and synthesize conclusions is valid or not.

Thinking, Fast and Slow is the kind of reading material that sparks fireworks in the readers’ brains. I could not reserve my thoughts only at the end of the book, so this is a first of what I expect will be a series (at least two) of reflections on the chapters.

Among its fascinating chapters—concise chapters I should add (yay)—one of my favorites so far is chapter 7. In this chapter titled “A Machine for Jumping to Conclusions”, Kahneman describes our brain’s tendencies to ignore ambiguities or suppress doubts in the information we are presented with.

One revealing example is the statement “Ann approached the bank.”

Most likely, the image prompted by the statement is a lady with some money business walking toward an edifice we call “banks.” For me, the moment I saw the statement, my mind did not conjure any other image—it was so plain.

Yet, if it was revealed that the statement preceding “Ann approached the bank” was “They were floating gently down the river”, the image would have to change drastically.

What just happened? It turns out that our mind has a mechanism, dubbed System 1 in the book, that likes to jump into conclusion in the absence of a clear context (System 2, on the other hand, is the mechanism responsible for deliberate thinking, logic, and reasoning). When there’s limited information, System 1 likes to generate its own context and is unaware of the ambiguity of the given information. Unless someone had just gone canoeing or read about rivers recently, it was unlikely that that he/she would have automatically applied the river-related meaning to the word ‘bank.’

This is so fascinating to me because it shows how interpretation can reveal more about the interpreter than the facts themselves. I automatically equated the money-related institution to the word ‘bank’ because, well, I’m a 21st century, urban woman who spends more times seeing Chase or Bank of America than canoeing in rivers. Thus my mind did not even search for other possible meaning and resolved the statement accordingly.

But the statement itself provided little information about what it actually meant.

I would admit that when the second statement was given, it disoriented me quite a bit—what was it talking about? I was that unaware of the alternate meaning.

To push it even further, if one insists that the word ‘bank’ means money-bank, he/she would have to get more creative in resolving the coherence between “They were floating gently down the river” and “Ann approached the bank.” Some things need to happen in the middle of the two sentences, and the interpreter would have to insert further speculations when no further information is provided. This may be correct, but without more information, it’s hard to say. It would just be another jump to another conclusion.

What I take from this chapter is that slowing down and suspending judgment is a good idea, especially for high-stake matters. If you don’t slow down, you may not perceive ambiguities and miss the true meaning altogether!

Reading is like treasure hunting. Usually, my casual reading materials follow a theme over some time. One book leads to another; one subject prompts questions on a related matter. Maybe I need time to let the thoughts simmer in my head before moving on to other topics. Or, it may just be obsession.

In an effort to blog again, I decided to write about my “book trail”, i.e., how I came across a title, my thoughts as I read through the book, etc. We’ll see how long this will last. Today’s inaugural title will be Just Mercy: A Story of Justice and Redemption

When I came across this book, I hadn’t read a full book in a while. Hence, to Amazon I went. Just Mercy was (still is) one of the popular books, with glowing reviews on Amazon. The title sounded religious, but the book introduction said it was about the criminal justice system. Intriguing.

Since I just got married, moved to a house, and began a life of long commutes to work, most of my reading time evaporated. After avoiding audiobooks for a long time (I’m a visual learner), it was time to give them a try. Just Mercy was my first audiobook ever.

I wrote my thoughts on the book in this post. I loved that the author himself voiced the audiobook, which conveyed the personal nature of his stories. The book was exceptional, but its strongest appeal was the author himself. Stevenson, a living, breathing, full time Good Samaritan, lives an extraordinary life.

Just Mercy’s subject matter, combined with recent events in the news, made for very relevant food for thoughts. It was not something I could pick up and drop, so I decided to read more about the criminal justice system and picked up a second audiobook, The New Jim Crow: Mass Incarceration in the Age of Colorblindness

Usually if I liked a book, I would be momentarily (or permanently) obsessed with the author. Naturally, I looked up other reviews, interviews, news articles about Just Mercy and Bryan Stevenson. Here are some of them:

Ever since I finished the book, I became more conscious when the topic of death row came up in the headlines. Recently, NYT covered Ray Hinton’s story, an inmate who was freed after 30 years being on death row. Bryan Stevenson took up his case 16 years ago and remained in Hinton’s legal team.

Of course, the article on Walter McMillian, whose story was the backbone of Just Mercy, also appeared in NYT in 1993.

Other articles on Stevenson:

The work of Stevenson’s non-profit organization, the Equal Justice Initiative, has been featured many times in NYT:

Just Mercy: A Story of Justice and Redemption

It has been a while since I’ve heard or read about a life so impressive as Bryan Stevenson’s, author of Just Mercy: A Story of Justice and Redemption. His chosen line of work, or calling, is to defend the poor and imprisoned, individuals sentenced on death row, condemned children, the mentally ill—those who can not otherwise defend themselves. 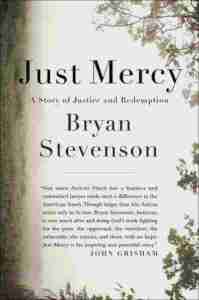 Just Mercy is a memoir and social commentary that will sadden and madden its readers, but also will inspire hope and compassion, all to the author’s credit. Its main thesis convincingly establishes that the poor and minorities become the recipients of excessive punishments in the justice system, disproportionately, not necessarily because they are the guiltiest, but because they are defenseless and seemingly inconsequential. As a nation, we are largely oblivious to this inequity, because “injustice is easy not to notice when it affects people different than ourselves,” wrote Nicholas Kristof in his review of the book. Stevenson is that Good Samaritan who does not pass by.

The story of Walter McMillian forms the backbone of the book. McMillian spent 6 years on death row due to a series of false witnesses and systematic disregard of credible evidence that he was innocent. He was wrongly convicted of a murder of a white woman, a convenient scapegoat, becuase his public reputation was already tarnished due to an affair with another white woman. McMillian was black, and this was Alabama in the 80’s.

Stevenson’s tireless efforts in McMillian’s defense helped free him in 1993, but freedom couldn’t erase the trauma of being in death row nor promised him life as before. He parted ways with his family, even though they loved and supported him, as the social and emotional costs of being associated with him became too much to bear. The rest of his life was a struggle, with Stevenson being one of his only close friends until he passed away in 2013.

McMillian and Stevenson’s many other clients become Stevenson’s arguments that reveal flaws in the justice system. Children tried and convicted as adults, ending up in adult prisons and suffering sexual and physical abuse; women inmates raped by prison guards, especially those who are mentally ill, and ignored; young people spending years or decades of their lives in solitary confinement, 23 hours a day. There is also a lack of infrastructure to rehabilitate the imprisoned to re-integrate into society… Stevenson and his organization, the Equal Justice Initiative, are determined to fix these things towards a better society.

I was pleasantly surprised to find Stevenson’s voice narrating his own audiobook. This first-person account has had quite an effect on me, and I’ve come to find him as a beacon of compassion. The amount of sympathy this man has toward those whom we largely overlook is admirable. He believes that we are all “better than the worst thing we’ve ever done,” and the bravery he shows to persevere in his lifework is a symmetric reflection of his belief. I feel privileged to have spent a few days with this memoir and to get to know its worthy author.