I love Go Set A Watchman (GSAW). I enjoy GSAW as a book, but I love it ever more as a phenomenon. From the story of how the manuscript was discovered, the speculation on whether or not Harper Lee was forced to publish it, the debate on whether it should or shouldn’t be published, to the discussions surrounding racial tensions dealt in the book, everything surrounding GSAW is unprecedented.

The reverse chronological timeline of the writing of GSAW and To Kill A Mockingbird (TKAM) versus their publications is the trickiest, because it colors the interpretation of the story and its characters. Consequently, it generates so many conversations and fascinating, enjoyable articles.

Before Go Set A Watchman

I had long neglected the skill of reviewing literary fiction. I can say, however, that I read GSAW with fresh perspective because I did not have much attachment to TKAM or its beloved character, Atticus Finch.

When I read TKAM in middle or high school in Indonesia, I had vague concepts of the cultural background from which the story emerged. My English was in early development, so the language, culture, and the world that the novel described were entirely foreign to me. I had no idea what Maycomb, Alabama represented nor was I aware of the cultural differences that existed in America.

My shallow view was essentially this: people said it was a good book and Atticus Finch was a good guy. He said something about picturing ourselves in another person’s shoes.

With a phenomenon like GSAW—a ‘sequel’ after 55 years of its ‘original’—it’s hard not to engage in comparisons. To me, however, the comparison between TKAM and GSAW both makes and doesn’t make sense. In the literary sense, the comparison means little since GSAW was not intended to be published as TKAM was. It was unfinished, in a way, so of course the result is less compelling and less polished than TKAM.

Moreover, after TKAM, anything that Harper Lee would have published would most likely be less compelling because of this reason. A spectacular performance, by regression to the mean, is likely to be followed by a comparatively ‘worse’ performance, even though the subsequent may still be good work.

What makes sense, though, is the comparison between the characterization of Atticus Finch and Jean Louise (Scout), the two prominent characters, in both books. But since I don’t remember TKAM, I can’t make any comparison, escaping this discussion altogether after writing three paragraphs on it…

What I like the most about GSAW is the complexity of Atticus Finch as a character. While Atticus is largely heralded as the hero of TKAM, GSAW does not have staple heroes or villains. Jean Louise, as the vehicle of the narrative, is naturally a sympathetic character, yet her reactions to discovering her father’s attitudes toward blacks are a mix of righteous indignation and immaturity. Atticus, all the while subscribing to the superiority of his race, still exudes some wisdom in the handling of his daughter’s outrage. In the words of Uncle Jack (Atticus’ brother), “[Atticus] was letting you break your icons one by one. He was letting you reduce him to the status of a human being.”

The heart of the novel is the weaning of Jean Louise’s conscience—and perhaps also the readers’—off Atticus’. To this weaning process, both parental figures are proud of Jean Louise’s clash with them, even though they differ in opinions.

All taken from the words of Uncle Jack,

“Every man’s island, Jean Louise, every man’s watchman, is his conscience. There is no such thing as a collective conscious.”

“. . . now you, Miss, born with your own conscience, somewhere along the line fastened it like a barnacle onto your father’s. As you grew up, when you were grown, totally unknown to yourself, you confused your father with God. You never saw him as a man with a man’s heart, and a man’s failings— I’ll grant you it may have been hard to see, he makes so few mistakes, but he makes ’em like all of us. You were an emotional cripple, leaning on him, getting the answers from him, assuming that your answers would always be his answers.”

“When you happened along and saw him doing something that seemed to you to be the very antithesis of his conscience— your conscience—you literally could not stand it.” Go Set A Watchman, Chapter 18.

What is the message of GSAW? Is it about freedom in opinions? Is it about the handling of familial relationships? Is it arguing a balance between idealism and realism?

I’m not sure what the novel’s intents are. Then again, the question of the author’s intent regarding GSAW is a tricky one—we may never know what Harper Lee thought when she wrote this manuscript. Plus, GSAW is too short of a story to handle the questions that arise post-confrontation between Atticus and Jean Louise.

What matters, though, is us, the readers, having these discussions now in 2015 vis-à-vis racism and discrimination. While GSAW does not provide resolutions to the coexistence between the two attitudes that Jean Louise and Atticus represent, we must. What are we to do with the Jean Louises and Atticuses in our society? How are we to live with differing and conflicting consciences?

Having a hero such as Atticus Finch being brought down to “the status of a human being” is disorienting to many, but it is a powerful device to disrupt the mind of a society. Do we now tolerate, sympathize, or discard him? Can we, should we, in his TKAM words, “consider things from his point of view,” “climb into his skin and walk around in it.” As a society, we see Atticus’ views in GSAW as objectionable. But what do we do with the human being?

Harper Lee does not answer these questions for us and she’s not obligated to do so. We, individually and collectively, must discover them for ourselves. Thanks to GSAW, we’re talking about it. If you love books and book reviews, these websites are excellent resources to find new reading materials.

I love the NYT! More often than not, I get that satisfied feeling after reading its well-written articles. NYT reviews are, of course, highly esteemed, so you can get good quality picks from its various lists and reviews.

This is the website of Shane Parrish, a writer and entrepreneur who calls himself a wisdom seeker. His posts have been featured repeatedly on TIME. His materials are excellent, focusing on books that teach you how to think and make decisions better. Of all the genres out there in the blogosphere, this is my favorite!

The Books & Fiction section of the New Yorker contains excellent, enlightening, and entertaining essays concerning books, the book culture, and related social issues. If you’re a bibliophile, this is a must-follow.

I find their essays are more philosophical in nature. The website features reading materials that are not necessarily on the current best-seller lists, which is great.

Sometimes they have very interesting interviews.

If you’re looking for sites that review all kinds of genres, these feeds can be entertaining. They spread their nets wide, so the articles come in droves. It’s hard (and not necessary) to keep up with all of their posts, so pick and choose which ones will be worth your time!

Amazon hosts this site, so it will always have the popular lists and easy access to the buying links.

I personally use Feedly to keep up with blogs and various news feeds. If you don’t have it already, try it! You can read unlimited NYT articles for free!! 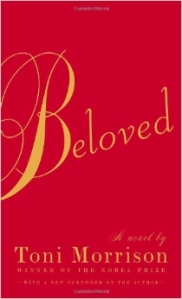 Beloved is a work of art. And like many pieces of art, there are aspects of it that I don’t understand. I’m not too left-brained, however, to miss the beauty of Morrison’s words and phrases.

Beloved tells the story of Sethe, an ex-slave, and her daughter, Denver. They live in a house, called 124, which seems to be haunted by the spirit of a baby—Sethe’s dead child. Upon the arrival of Paul D, an old friend/fellow slave of Sethe, the spirit left the house. But not long after, a girl about the age of Sethe’s daughter if she had lived arrives at 124 and catalyzes a series of reactions from the 3 main characters. This woman calls herself Beloved.

The confusion of who, or what, Beloved is remains a mystery, both to the characters in the novel and the readers. Sethe and Denver believe she is the dead child returning in flesh. Or, she may be just a confused girl who believes Sethe is her mother. Regardless, as a literary device, the character Beloved is brilliantly created to trigger the other characters’ development.

Indeed, character development is, to me, the meat of the story. With Beloved’s presence, they are faced with history in slavery, their past actions, and how they are impacted by their past. Beloved’s identity is confused with the beliefs that each character projects to her—whom they think she is.

My favorite parts of the book are when Morrison zooms in to the internal narratives of each character, employing the first-person point of view. The emotions are palpable. The plot’s climaxes are also glorious, in a terrifying way (I won’t spoil any plot).

Zooming out to the social context that Morrison is addressing, Beloved is a powerful painting of what slavery does to humans and their sense of ‘self.’ Multiple times in the novel she describes a fragmenting experience that the characters experience—feeling that their heads, arms, or legs are coming apart, or not recognizing their own voices. Even though the characters are technically free men and women, the trauma of being owned and tortured remains in their lives.

There are two things (for the sake of this short review) that I think Morrison highlights in the novel. One, the impact of slavery is intergenerational. Denver grows up free, but she very much reaps the experiences of her mother and grandmother. The healing process from the evil of slavery is long and arduous. Two, when someone or a people is degraded, all humanity is degraded. Slavery does not only degrade the slaves, but also the perpetrators. A web of humanity connects us all.